Today, Langlitz Leathers is a fully functioning shop in Portland, with a staff of 15 highly skilled people, a myriad of products to choose from, and a fantastic community of customers that spans throughout the world. 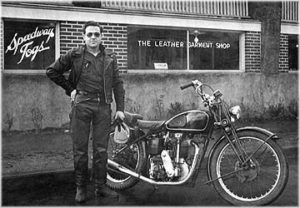 It didn’t start this way though; in fact, when Ross Langlitz first opened up shop in 1947, he never dreamed that the Langlitz name would grow to reach across the ocean.

Like many businesses, Langlitz Leathers was grown out of a need that the market couldn’t fulfill. Ross’ great love of motorcycles and speedway racing demanded he have high quality protective gear, suited for riding. When Ross discovered he couldn’t readily purchase such a thing, he decided to put his skills learned working in a glove factory to use. A jacket from Sears served as the building blocks as he reverse engineered it and made modifications to meet his riding needs.

The finished result was a jacket that impressed Ross’ friends and community to the extent of many requests for the same. Eventually, Ross found the demand was too great and working out of his basement wasn’t cutting it. In 1947 he brought two seamstresses from the glove factory with him and opened up shop, renting space in the basement of another local leather company (Culbertsons) and began building his jackets under the label Speedway Togs. A couple years later, he decided to give his growing business the name Langlitz Leathers. And thus was the beginning of something grand.

In 1971, Ross’ daughter, Jackie, began working for him. Learning every piece of the craft from cutting and sewing, to bookkeeping and paperwork, Jackie took it upon herself to carry on the quality and traditions established by her father. Jackie’s husband, Dave, joined the crew some years later. Taking advantage of the fact that Ross had not retired quite yet, Dave seized the opportunity to be trained by Ross himself.

Jackie owns the business, and Dave ran the shop for many years. They have since retired, but not before training and establishing a sound staff. As granddaughter of Ross, and daughter of Dave and Jackie, I (Judy Langlitz) am working to uphold the Langlitz name. Scott, John, and Bennie are the gurus who help keep the shop running smooth. With two cutters and seven seamstresses, we are a small operation; however, we utilize our small numbers for maximum quality control and the ability to better offer custom service. Despite our size, together, we make up the team that is proud to still claim the title The World’s Finest Motorcycle Leathers. 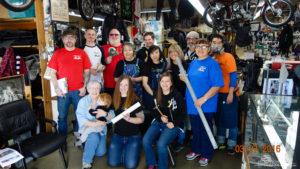 How To Measure »
More Testimonials »