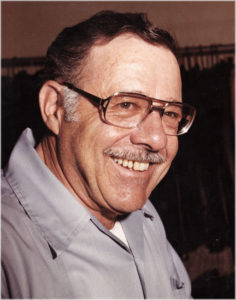 My name is Judy Langlitz, and what I am about to recount is a brief rundown of my grandfather’s story.

Ross Langlitz was many things to many people. A great friend, a smart business man, a hard working husband, a loving father, a legend, and to me personally, the most inspirational grandfather one could ever hope for.

Fred Saberhagen (renown author) once said, “If people ask me for the ingredients of success, I say one is talent, two is stubbornness or determination, and third is sheer luck. You have to have two out of the three. Any two will probably do.” I reckon Grandpa had all three, with talent and stubbornness in spades. From his reaction to the loss of his leg, to his family, to his business, this man was truly exemplary.

Ross was born on July 10, 1918 in Plymouth, Idaho. Not long after he was born, his parents divorced and Ross was left to be raised by his grandma, Darnall. Living on a farm, they were hard working, but poor. Ross loved dogs and found delight in taking in strays. When he was merely nine years old, Grandma Darnall became ill and he had to drive her to the hospital; she had a massive heart attack, and passed away in 1928.

Ross was then whisked away to McMinnville, Oregon where he was to live with his mother, Bernice and step-dad, Dan (Langlitz). Bernice and Dan ran a very religious household, and Ross was extremely dismayed to discover that his new step-father didn’t like dogs. His teenage years were spent in a state of rebellion against his parents. By the time he was 16, Ross was drinking, smoking, and riding motorcycles.

Motorcycles were a great release: a true biker inside and out, throughout his life he had multiple Harleys and other bikes including a Honda Superhawk, a Ducati Diana Mark 3, and his beloved Velocette that is still in Langlitz Leathers today. Growing up, he lacked a dog as a best friend (due to his step-father), so his best friend became his motorcycle. Unfortunately, one fateful night when he was a mere 17 years old, Ross and his best friend Roy were riding down a street when a drunken truck driver backed his truck out of a driveway. The truck driver, not seeing Roy and Ross, backed into the street and over Ross. He was rushed to the hospital where he survived, but at the cost of a leg. He was in the hospital for six months and after amputating Ross’ leg, the doctor told him that he probably could never and should never ride again. But Ross was stubborn. He did not follow the doctor’s orders. He did not follow the advice of his friends and family. He followed what he loved. He worked hard to be able to get back on his bike, and when he finally did, he rode straight to the hospital to show that doctor that he not only could but would ride his bike again. The loss of his leg only fueled his determination to not only ride, but be successful in all that he did.

He worked as a mechanic at a Harley shop in Phoenix, Arizona. When the summer heat became too much, he returned to Oregon and worked at a leather glove factory in Carlton as a cutter, soon becoming a manager.

In 1944 Ross wooed and wed the love of his life, Mavis (Pinky) Edwards.  She rode her own Harley, and those early days of their marriage were filled with Gypsy Tours, Poker Runs, hill climbs, and speedway races.
…
Riding so often, Ross needed gear to keep him safe.  Unhappy with the leathers available on the market, he bought an old sewing machine and made his own jacket — built to fit while in riding position, and to keep out wind and rain. His friends started asking him to build them jackets, and as word spread he soon had so many requests he decided to try his hand at starting a business. In 1947 he opened up The Leather Garment Shop and started building jackets under the label “Speedway Togs”. A couple years later, he changed the name officially to Langlitz Leathers, and eventually even got his own building, no longer working out of the basement of Culbertson’s (another local leather company).
…
In 1945 Ross and Pinky had their first daughter, Nicki. With the addition of their second and third daughters (Jackie in 1949 and Judy in 1955), they were very busy raising a family and growing Langlitz Leathers. To support his family in the early lean years of his business, Ross bought a commercial fishing boat with his friend Roy, and they spent the summers fishing for extra income.
…
Ross loved fishing.  And motorcycles, dogs, music, tattoos (which was a problem for Pinky — money was tight in the early years and tattoos were not high on her list of priorities!), and later added trapshooting to his hobbies  He played the guitar, banjo, piano, and harmonica – all by ear, never having had a lesson in his life.

By 1970, Ross was starting to think about retirement. In 1971 his second daughter, Jackie (my mother), came to work for him. After a two week trial, it was clear that Jackie was up for the challenge and an excellent fit for the shop. A few years later her husband (my father), Dave, followed suit. Ross trained them both to carry on his traditions and business ethic, and they helped mold the shop into much of what it is today.

“When mom and Dad retired they spent their time crabbing on the Siletz Bay and steelhead fishing on Drift Creek right outside their back door.
He was diagnosed with colon cancer just before Mom was diagnosed with brain cancer. Mom had brain surgery and was told she would live 6 months to a year.  Dad had a successful colon surgery, and expected to recover and take care of Mom for her remaining time.  He was recuperating at home when he died suddenly and unexpectedly. It was an incredibly difficult time for mom.

My grandpa died in 1989, and Grandma in 1990. I was very young at the time, but I will always cherish what few memories I have with them. It is an honor to have Langlitz Leathers still standing true, so that I may have a living reminder and continuing relationship with my grandfather. I am extremely fortunate to live with his legacy every day. I love you, Grandpa.

How To Measure »
More Testimonials »